by Dan Aaronson and Friends 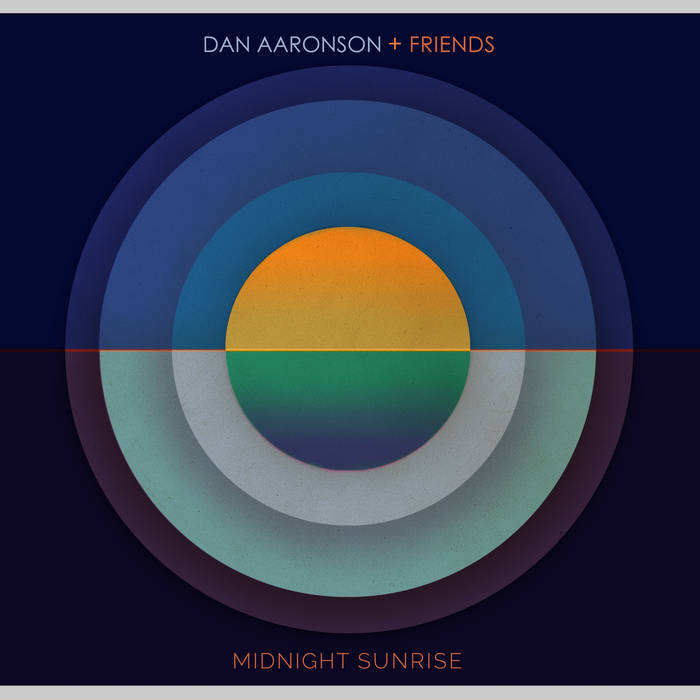 Dan Aaronson and Friends combine elements of late-20th century synth rock and piano pop with immersive jams and splashes of electronica to create a timeless and distinctive sound.

The album marks the return of multi-talented songwriter and keyboardist Dan Aaronson, who made his professional musical debut in the early 2000s as a founding member of the Tufts University-based jam band Redshift 6. Following the release of his jazz- and new age-infused solo instrumental album Daylight Savings in 2003, the Boston native relocated to Chicago and ultimately traded his day job as an attorney and mediator for that of a full-time dad. In between diaper changes and play dates, he began hosting weekly jams in his basement with a loose coterie of friends and strangers. Inspired by these collaborations, Aaronson began composing and recording a new album encapsulating his days, both real and imagined. With musical contributors drawn from Aaronson’s friends and family both near and far, Midnight Sunrise features the talents of guitarists/vocalists Tim Weber and Jonny Aaronson, bassist Chris Blomquist, vocalist Neeloofar Haghighat Jenks and violinist McKenna Glorioso.

The versatile assemblage kicks off with “Tomorrow Is the Day You’ve Been Waiting For,” a classic rock jam featuring timeless harmonies and a lead guitar hook that could have been plucked from a Phish rave-up. The tuneful “Full-Time Dad” then brings the listener back to Earth – which doesn’t sound like a half-bad place to be, as Aaronson describes it. “More Time Than I’ve Got” nods to Aaronson’s progressive rock influences, and bluesy ballad “Just Keep” features strings, guitars and compelling vocal harmonies. The Beach Boys-meets-Ben Folds “Where You Need To Be” elevates and energizes before the album takes a jazzier turn with the Genesis-inflected “When You See It You Will Know.” The Doorsy organ and towering guitars of “Hard Place and a Rock” throw the album into overdrive and provide the ideal soundtrack for aggressively decorating a gingerbread house. The epic “March of the Musk Ox / Spring Is Born” suite balances an urgent lyrical delivery with the organic sounds of the piano, accordion, ukulele and violin. Title track “Midnight Sunrise” lulls listeners into an almost dreamlike state before bursting into a danceable and Bruce Hornsby-esque coda. The synth-heavy “Seen It All” features standout fretwork from guitarist Jonny Aaronson as it builds to a wistful crescendo. “Marathon Day” echoes the immortal words of Red Sox slugger David Ortiz in paying defiant tribute to the iconic Boston footrace, while the poignant duet “Before It Was Gone” evokes a mood of nostalgic reminiscence. The album’s breezy closing track “Don’t Close the Door” feels like one big, satisfying exhale before the listener is jolted to attention by a ‘hidden’ track.


DANIEL AARONSON – Vocals / Piano / Synth / Accordion
Dan Aaronson is a Boston-bred multi-instrumentalist songwriter and vocalist living in Chicago, Illinois. He grew up playing the piano and idolizing Bruce Hornsby. At age 14 he composed and performed the processional music at his 8th grade graduation ceremony. Dan made his professional musical debut in the early 2000s as a founding member of the award-winning Tufts University-based jam band Redshift 6, playing the Boston music scene and sharing the stage with such artists as Guster, Jurassic 5 and Original P. His 2003 solo debut, the jazz- and new age-infused instrumental album Daylight Savings, was distributed internationally by the Orange Music label. In the years following, Dan relocated to Chicago, started a family, and ultimately traded his day job as a government attorney for that of full-time dad (and part-time musician). He formed Dan Aaronson and Friends in 2014 and released Midnight Sunrise in 2016.

JONNY AARONSON – Guitar / Ukulele / Vocals
Jonny Aaronson is a musical and visual artist from the Boston area. He cites amongst his musical influences the guitarists Mark Knopfler, John Scofield and Pat Metheny. He began studying guitar at the age of nine and made his recorded debut at age 16 on brother Dan Aaronson’s 2003 album Daylight Savings. Jonny works as a media artist with expertise in animation and motion graphics, visual editing and effects, and graphic design. He conceived and created the album art and layout for Midnight Sunrise. His professional portfolio can be found at www.aaronsonportfolio.com.

CHRIS BLOMQUIST – Bass Guitar
Chris Blomquist is a bassist, guitarist and avid collector of musical instruments. Born in Chicago, he has spent decades honing his low-end craft by learning from and listening to everything from Peter Cetera (Chicago) to John Taylor (Duran Duran) to John Stirratt (Wilco). A self-described computer nerd since the age of ten, Chris has long enjoyed exploring the intersection of music and technology. He has performed with Chicago-area legends Empty Shack, 4WD, Clamshell, and Wedding Tackle. Describing his musical collaboration with Dan as “a wonderful new adventure,” Chris looks forward to continued music-making as a member of Dan Aaronson and Friends.

MCKENNA GLORIOSO – Violin
McKenna Glorioso is a violinist living in Montreal, Quebec. She attends the Schulich School of Music at McGill University where she is pursuing a Bachelor’s degree in Violin Performance. Along with her classical studies, McKenna enjoys performing contemporary classical music and collaborating with jazz, folk and pop musicians.

NEELOOFAR HAGHIGHAT JENKS – Vocals
Neeloofar Haghighat Jenks is a vocalist who lives in the San Francisco Bay Area. She has sung in choral groups for most of her life, and she is working on developing a harmonious garden of flowers and vegetables and a colony of bees.

TIM WEBER – Guitar / Vocals
Guitarist Tim Weber hails from tiny Cleveland, Wisconsin but has called Chicago home since the turn of the century. He counts Jerry Garcia, Jimi Hendrix, Stephen Malkmus and Nels Cline among his axe-wielding idols, and his left-handedness makes him a prime candidate for power tool injuries. In his spare time he enjoys climbing trees, missing the point and spending time with his family.

Bandcamp Daily  your guide to the world of Bandcamp